How I got published: Marian Perera 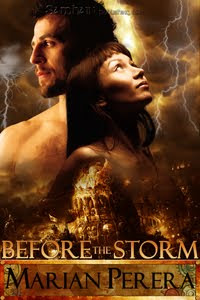 I am very fond of Marian Perera: she is a knowledgeable and prolific member of Absolute Write, has supported How Publishing Really Works ever since it first appeared, and runs an excellent blog of her own. She studies medical laboratory technology when she isn’t writing, or blogging about writing. Her debut novel, Before the Storm, is a fantasy that combines steam engines and a steamier romance. You can read an extract of it here.

She works tirelessly at her writing, and puts a huge amount of effort into helping other writers improve. I was so glad when I learned that she'd sold her first book: here's how it came about.

That was roughly the length of my first manuscript, and it was the first in a projected four-book series. Even for fantasy, it was… ambitious.

I’d meant it to be a grand Tolkienesque epic: traditional in story, sweeping in scope. Selling such an opus would not be easy, but among the polite rejections was a request for a full from Tor.

That turned out to be a mixed blessing. It kept me persevering through more rejections, but I also took it as a sign that the epic was good. Even when the full was rejected I kept writing sequels – sequels which, of course, couldn’t be submitted anywhere.

It was disappointing and began to wear down my interest in the epic. So I started playing with a quirky idea for an unrelated fantasy. Since that wasn’t the start of a doorstopper series, I thought of it as a small, self-contained story that took second place to the epic.

But it was surprisingly fun to write. Because it wasn’t a strict fantasy in the tradition of Tolkien, it could involve science as well as magic. I’ve always been interested in chemistry – well, in blowing things up – so the characters used calcium carbide cannons and steam engines in a battle. And there were also some steamy encounters that didn’t involve the engines.

At that point, I realized the little project had grown into a standalone novel. Leaner and better-written than the epic, it stood more of a chance of meeting agents’ and publishers’ submission guidelines as well.

So I sent it out, revised, resubmitted and signed up with an agent.

That turned out to be a mixed blessing too. The agent’s advice improved my manuscript, and I learned something else in the process – what writers should and shouldn’t do when searching for representation. But in the end, the steam engines were spinning their wheels in that particular situation.

By then I’d also learned to reconsider anything that didn’t further my career, whether that was a grand epic or an agent. It helped that steampunk was increasingly popular, and I decided to submit the manuscript myself. I looked for a publisher that didn’t require representation, such as a small press.

This time around, I did the research before submission, rather than after acceptance. Some writers recommended Samhain Publishing for speculative fiction with romantic elements, and there are independently compiled sales stats and royalty figures on Samhain and other romance e-publishers at Show Me The Money and EREC.

Samhain had a thread over twenty pages long on the Absolute Write forums and I read through that. Given the choice of sending a manuscript to a general submissions address and targeting someone in particular, I picked an editor who said she liked strong worldbuilding and characters from different cultures. She responded a month later, accepting the manuscript.

There isn’t too much mixed about this blessing, maybe because I finally started doing things right. My first novel, Before the Storm, has just been released by Samhain and I’m very pleased with its design and production. My editor expressed interest in a sequel, but while I’ll start that very soon, I’ll also query agents about another standalone fantasy with a scientific twist. This time it’s dragons and clinical psychology.

Email ThisBlogThis!Share to TwitterShare to FacebookShare to Pinterest
Labels: How I Got Published, independent publishers

Wonderful cover! Congratulations! It's interesting to hear about your path to publishing. I am researching all the avenues as well and it can be confusing at times.

I absolutely adore this post because I found myself nodding and saying, 'that's so true'.

We may start by admiring another writer's style, but I've seen it time and again that the stories really come to life when we discover our own style.

Congrats on your debut.

"I learned something else in the process – what writers should and shouldn’t do when searching for representation."

I wondered if you could expand on this?

Three cheers for Marian. She's always been a lovely addition to AW. Marian, may you sell thousands!

Thank you so much for hosting me, Jane, and for your kind words! I haven't just learned from writers like you, I've been encouraged as well. Whatever I do is just paying it forward.

J. L. Jackson : You're right, it can be confusing, especially with all the options available publication-wise.

Ebony : Thank you! There's also the story of how I tried to emulate Richard Adams' style because I loved Watership Down.

Anonymous : The most important thing I learned was to not assume that because an agent has sales/experience in one genre, that agent will be equally able to make sales in another.

It's also important for me to have an agent on the same wavelength when it comes to matters like responding within a certain time-frame. My editor at Samhain is great that way. She holds me to deadlines and responds fast. I didn't have the same experience with my ex-agent.

Lynn - You're another inspiration. May you never run out of excellent manuscripts and dry martinis. :)

Fascinating and inspiring. Thanks for sharing your journey to publication and some super advice.
I hope to get there one day. :)

It's easy to get published - the real test is in getting readers to read your work.
I have used Smashwords to epublish my work and to date have approx fifty readers. On memoware.com I have over two hundred and fifty readers.
All in the space of a few months.
But boy was it hard work - blogging, Facebook, Twitter, etc.