Nicola Morgan writes for teenagers and has the unusual habit of involving them in the marketing of her novels. Her new thriller, Deathwatch, is being launched by pupils from The Mary Erskine School in Edinburgh, who also helped write the book and appear in the story. One of those pupils, Ailsa Innes, wrote the following article for this Trios series.

Last time Nicola told us about her extraordinary efforts to promote this book; next week we'll have a contribution from bookseller Vanessa Robertson, from The Children’s Bookshop in Edinburgh, which will complete this particular trio.
If you'd like to be in with a chance to win your own copy of Deathwatch then answer this question: in which UK city is Deathwatch set (my more resourceful readers will realise that the answer might well be found on the Deathwatch page of Nicola's website). Email your answers to "n at nicolamorgan dot co dot uk", and a week after the final piece in this particular Trio is published, Ms Morgan will pick one name at random out of her virtual hat.

And now, over to Ailsa.
For a couple of years I had really enjoyed books by Nicola Morgan, especially The Passionflower Massacre and Mondays Are Red, and was very excited to hear that she was coming to talk to our year. I was even more excited when I heard that she was looking for helpers to write her new book about a stalker (the name ‘Deathwatch’ had not been created yet). I put all my effort into writing what I thought was the perfect letter to Nicola, describing why she should definitely choose me to help, and was pleased when I and thirteen classmates from The Mary Erskine School, Edinburgh, were chosen.

One of the first things we did was meet Nicola at the Edinburgh International Book Festival and listen to her read part of what she’d written, although it did help that we had ice creams as part of the deal! We set up a messaging board on Yahoo! and used it to discuss issues—everything from the words a teenage girl would use when she was irritated, to the best name for an invented social networking website. We also said that stick insects weren’t scary enough and decided that Madagascan Hissing Cockroaches were better! 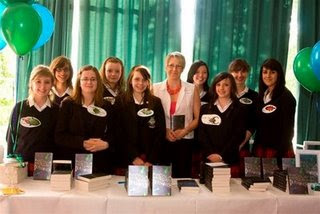 Another early job was to help at the official launch of The Highwayman's Curse, a sequel to Nicola’s hugely successful The Highwayman's Footsteps. We took people’s coats, prepared and served appetisers and ticked names off a list as guests arrived. Two of us also performed a dramatic curse for the audience! I was selling Nicola’s books, and was kept busy trying to calculate change! It was a very fun evening and made us even more excited about our own book’s launch.

I was one of the girls lucky enough to read the first complete draft, months before the final version was ready. It was a very heavy pile of A4 pages, but even then I was gripped by the storyline, and the occasional spelling error! [Thanks! NM] When the final version was ready, I first read it on my computer, but then Nicola gave us each a signed copy of the actual book and our names are in the acknowledgements. Nicola had also asked me if she could use another girl’s name and mine as friends of the main character, and of course I agreed! All members of the team have their names in minor roles in the book, which we find very exciting.

We have been extra busy this term, dealing with publicity: reviews, press releases, getting libraries and other schools involved, and my task was to write this blog.

The launch was an extremely enjoyable night for us, and we were so excited to see our book finally out there and going into bookshops. It was a huge success and many important and exciting people were there!

I started this project when I was 12 years old (I am now 14) and am amazed at how long a real book takes to be produced—there’s so much more than just writing it! I think this whole experience will be something that I will be amazed about when I am older—rarely do teenagers get a chance to help a writer produce a book, let alone get a character named after them in the deal! I am very pleased that I saw this project through and am sure it will be a complete success.

My thanks to Ailsa Innes for this: I hope some of the girls on the team, some of whom are shown with Nicola in the photo above, manage to drop by and comment here: it would be great to hear some dirt on Nicola Morgan from the people who really know. I bet she hogged all the ice-cream at the party.
Posted by Jane Smith at 10:00

May I be the first to congratulate Ailsa on her post? It was informative, fascinating and extremely well-written. I wouldn't be at all surprised if she and friends wrote Deathwatch themselves and that Morgan woman took all the credit...

I really like this piece too, Sally, and think that Ailsa did an excellent job with it. I am very impressed, and a little bit threatened that she's writing as well as this and yet is still just 14.

And I'm still knocked sideways by all the various promotional events that Nicola Morgan has agreed to do for this book. I think there must be at least three of her, and I bet they're all wearing sexy boots.

That's my cover blown - yes, I am an ice-cream guzzling cheat who gets 14-year-old girls to do all the writing. Sounds like a good idea actually. Sign me up. And yes, who said young people can't write nowadays and schools can't involve themesleves in innovative "out of the box" projects??

Well this across-the-ponder just got her copy of The Highwayman's Footsteps, and I'm loving it. Brava, deal Nicola!

Thank you very much for your comments about the blog, as a person who's been interested in writing for a long time it's really nice to hear :) i have to say that nicola morgan did write it, although i would love to take credit for this book!