We had a lovely New Year's Eve this year, part of which was spent following our sons as they sledged down the mile-long track which separates our house from the road. Here are a few pictures which I took along the way. 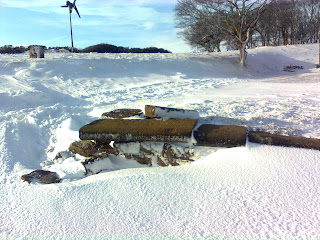 The stones in the foreground are the topstones to an eighteen-inch high wall which borders our front lawn. The snowdrift just visible to left of the picture blocks the path to our front door (which is roughly opposite that tree), so when there's snow we have to park a distance away from the house. Oh, and look: there's our wind turbine. It's a 6kW Proven, was one of the first in the Peak Park (and has since been trumpeted as a brilliant installation by the Peak Park, despite several objections to our planning application). It provides us with almost all the electricity we need, and a lot of our heating too: our house is completely off-grid, so when the wind doesn't blow (which isn't often, here) we use a diesel generator to make our own electricity. 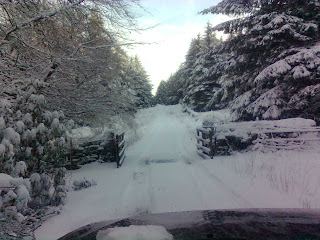 Half-way down the track is this cattle-grid, now up to its ears in snow. The good news is that the snow also fills the many potholes in the track: the bad news is that although I drive a Discovery, it isn't entirely dependable on snow as deep as this and I've spent the last few weeks slipping about far more than I'd like.

The trees are pretty, with their skirts all full of snow: but the weight of it hangs heavy on them and brings them down. Just two so far this winter, and we do have a chain-saw and the wood comes in handy: but that's two too many when I have to get the boys to school. 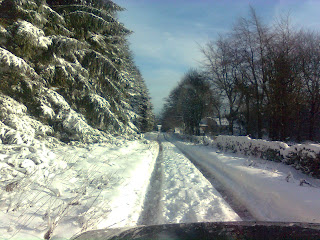 The last third of a mile down to the road is pretty straight, and all downhill. The snow wasn't too deep when this was taken: you can almost see the track breaking through in the bottom of our wheel-ruts. I long to see it again!

On the right here is our neighbour's field, which was home to a trio of guard-geese before the fox got to them in November. Part of me is glad they didn't have to endure these weeks of bitter cold; part of me misses the geese's constant grumbling, their low-slung, swaying behinds, their curious presence. Despite the gander's frequent wide-winged attacks, his his dry-mouthed hissing always delighted me--so long as I was in the car!

A little further on, on the right, we reach our neighbours' houses. Then there is a stretch a few hundred yards long where there's a drystone wall which borders a nasty drop, into water. Every year I worry I'll lose traction in the snow, crash through the wall, down the slope, and into the stream. I've not done it so far. Fingers crossed. 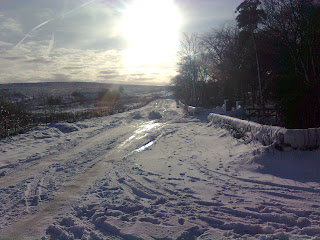 And here we are at the road. On the left of the picture there's usually a reservoir but right now it's drained, while maintenance work is carried out (it's been drained, off and on, for the last three years for this work, but there's been precious little evidence of any work going on). The road is a dead end and luckily, the way out is in the other direction otherwise those giant snowballs which have been made on the road would stop us getting out when we need to. Despite all this snow, people still come up here to have a look at the countryside: on New Year's Day we towed a couple of cars out and ignored a few more. Why do people think their little hatchbacks will cope with snow which is over their axles? I don't understand.

Since New Year we've had more snow, got the car stuck a few times, got the boys to school five miles away when their friends who live within yards have stayed at home, and I've managed to kill my mobile phone by using it when it's far too cold for pretty red phones to be outside: but for now, these few snow pictures will have to do. If I get the time I'll post a few more pictures in a few days: but in the interim you'll have to make do with more of my usual publishing nonsense.
Posted by Jane Smith at 10:00

Email ThisBlogThis!Share to TwitterShare to FacebookShare to Pinterest
Labels: diversions

Sighing with pleasure at your beautiful pictures, but can understand struggle as brought up on top of a hill. Very very jealous of your wind turbine, but feel it might pull our roof off if we tried one here.

Thanks for the lovely photographs, amazing isn't it, we in England have had several weeks of far less snow but it has brought our country to a halt. We are just not prepared for such events. Well done, getting to school when local people didn't, but sorry to hear about the demise of your phone...
Carole.

I had always dreamed of having a wind turbine powering my massive home, but living in a tiny condo in New York City makes that dream unattainable, for now. Perhaps, when I have my little writing cabin in the country somewhere…

Ooooh. Lurrrrvly. But today I could send you a pic of a pavement, a real pavement, so nur!

Take care and be safe. Nx

As much as I hate snow, that's all very pretty... love your wind turbine! I want one, but pretty sure my Home Owner's Agreement won't allow it.

I'm with you on those strange people who think they can cope with the conditions up here in their little 'townie' run-arounds. The other day a local driving a Discovery down a one-in-three road that never gets gritted had a lucky escape when it slid off a hairpin bend, bounced over a couple of snow-buried walls and ended upright on the lane lower down.

Jane, Nicola, Sally, it's all arranged. You three are coming to California, where the sun is warm and brighty shiny. We can hit the beach and return to the beagle's freshly-made margaritas.

Gorgeous photos - snow does make everything look rather magical :o)

Photos are amazing, but I would NOT want to live there. Courage - the thaw is in sight!

Hi, I've been following you on Twitter but came across your blog yesterday (via Nicola's blog party).

Have been wondering where you live that is so remote and it's lovely to see these pictures. Makes my snowed in Bucks village feel like the West End!

BucksWriter, I live in the Peak District National Park, west of Sheffield.

Jan: the thaw might be in sight where you live, but today the snow is feet deeper than it was when I took these photos, and it's still falling. No wonder I drink!

Lynn: if I could reach the airport I'd be on the next plane. But David's car hasn't made it home since the middle of December (he drives a Ford Focus, which is a smallish saloon car) and my car, a Land Rover Discovery, can only get to within about half a mile of the house and David's using it to get to work. So I have no transport. I could call a cab, I suppose, but...!

As for the rest of you: yes. This is a lovely place to live for most of the year but right now that doesn't quite compensate. It's lucky I have a short memory.

I took a couple of photos today which demonstrate the depth of some of our snowdrifts. I can't get near the bigger ones, they're too dangerous: but if I have time I might post them in a bit. Watch out for them, and prepare to feel even MORE sorry for me.

Oh Jane it looks lovely - and very inconvenient to live with! Vanessa and Nicola and all those other lovely people are refusing to send me their snow...we need some here to put the bushfires out! Please?

Good grief! I had no idea it was like that - here in London we're just struggling with the usual old slush. But there is something marvellous about lots of snow. When I was a child in Germany we used to get so cold, yet winter was always my favourite season because the snow transformed the rather ugly little town into a wonderful place. Love the pics.

What beautiful pics, Jane -
You're a bit further north than where I live (Sutton Coldfield).It's cold here all right, but no more than about 4 inches of snow. Actually seeing a pavement has become a rarity.
btw,I'm so grateful to you for posting about Nicola's party.
I've visited loads of excellent sites and still have many more to visit.

What beautiful pics, Jane -
You're a bit further north than where I live (Sutton Coldfield).It's cold here all right, but no more than about 4 inches of snow. Actually seeing a pavement has become a rarity.
btw,I'm so grateful to you for posting about Nicola's party.
I've visited loads of excellent sites and still have many more to visit.

I do love living in the big city, but that also means the snow on the sidewalks is brown and sludgy. Your pictures were a lovely contrast. :)